You are here: Home / Archives for Tabuk Marine Park and Wildlife Sanctuary 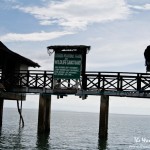 Just a short introduction, Tabuk island (Tabuk Marine Park and Wildlife Sanctuary), was declared marine park and bird sanctuary through a municipal ordinance in 1995 thus protecting the island from man’s wanton abuse. Fishing was banned within the vicinity of the island, and then the depleted mangroves in the island miraculously recovered, after it was declared "no man’s land". Tabuk Island … END_OF_DOCUMENT_TOKEN_TO_BE_REPLACED